Best things about bells:
• They're colorful...you'll find them in a bold rainbow of colors from green to red and even purple!
• They're plentiful...which means they're cheap, especially if you grow your own.
• They're flavorful...greens are mild, yellows, oranges and reds are sweeter.
• They're healthful...jampacked with vitamin C, plus loads of A and B6!
• They're stuffable!  :)

Wild rice FYI:
• True wild rice is considered a sacred gift by tribal cultures in North America.
• It's pure, natural, unmodified and harvested by hand in the upper midwest according to strict standards that preserve the environment and the tradition.
• It's a fascinating process that honors the earth and your good health too!  :)
• Rich in nutty flavor, it makes yumful stuffing!  :)

April is a treehugger, a writer, an illustrator and an animalsaving vegan. If you leave her alone with an empty pepper, you'll get a crazydelicious veghealthy dinner!  ;) 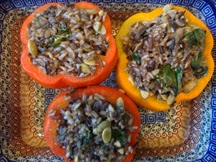 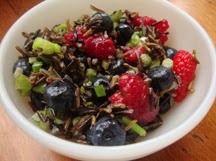 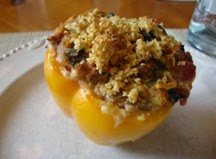 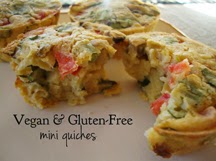 What would you stuff in an empty pepper? How do you wild up your rice? When was the last time you hugged a tree?  ;)

Find more feasts in our 2014 Daily Food Holiday and Featured Blogger Series!
Posted by The Peace Patch at 3:36 PM